You are here: Home1 / News2 / High School: Learning about the Complexity of Governance

In collaboration with the River East Collegiate in Winnipeg, Canada, GISB’s grade 11 & 12 students embarked on a two-day virtual political education adventure. Through an online simulation game called “Klima im Wandel – Changing Climate,”  students experienced the complexity of political negotiations in a playful manner. They took on the roles of relevant actors and engaged in political decision-making, which included lobbying for their interests and understanding other points of view. 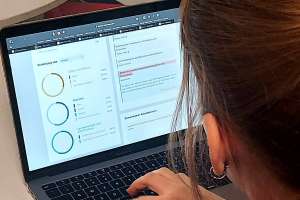 At the end of April, grade 11 & 12 students left Boston to visit the imaginary countries of Amalia, Jakania, and Markisia. We spent two days taking part in political decisions and shaping our country’s course for the next 15 years. And amazingly, all of this was done from our computers. GISB students connected with students studying German at the River East Collegiate in Winnipeg and logged onto a simulation game called “Klima im Wandel – Changing Climate.” There, we took on new identities. Each country had a governing party (“die Regierungspartei), an opposition party (“die Oppositionspartei”), climate activists, and representatives of certain industry branches, e.g., factory owners. As part of our virtual identity, we worked for one of these groups in a specific country. We also received information on our country’s history and its political and environmental priorities and goals. 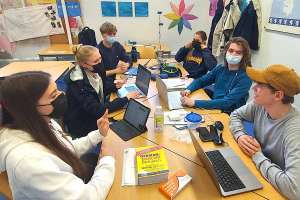 The simulation spanned over a 15-year administration period, three rounds of five years each. In the beginning, all parties had to agree on priorities and tried to enforce these throughout several election cycles and finally at a climate change summit (“Klimagipfel”), where all representatives of the three countries came together. In each round, the countries had a certain budget available, and we had to decide how to invest the money. The industry sector demanded more funding for gas and coal, while climate activists asked for investments in renewable energy. Throughout all of this, the governing parties had to make sure that the unemployment rate wouldn’t rise. The simulation game provided us with various statistics to monitor our country’s GDP, CO2 emissions, energy resources, and much more. Since everybody’s priorities differed so much, it was a challenge to assert ourselves. We all soon realized that nobody was going to get everything; the key to making progress was compromise.

After 15 years, we returned to Boston. I’d like to say that we saved our imaginary countries from climate change and all its consequences, but it wasn’t all that easy. While we did make changes for the better, we also learned a lot about the long and difficult processes that are required to reach a decision and make fundamental changes.

It was an exciting learning experience, and it was great that it provided the opportunity to get to know our new friends in Winnipeg. We’re hoping to stay in touch and collaborate again. The project gave us insight into the complex world of governance and politics. Hopefully, one day, we can make these changes in a non-imaginary country.

This site uses cookies. By continuing to browse the site, you are agreeing to our use of cookies. Learn more

We may request cookies to be set on your device. We use cookies to let us know when you visit our websites, how you interact with us, to enrich your user experience, and to customize your relationship with our website.

These cookies are strictly necessary to provide you with services available through our website and to use some of its features.

Because these cookies are strictly necessary to deliver the website, refuseing them will have impact how our site functions. You always can block or delete cookies by changing your browser settings and force blocking all cookies on this website. But this will always prompt you to accept/refuse cookies when revisiting our site.

We fully respect if you want to refuse cookies but to avoid asking you again and again kindly allow us to store a cookie for that. You are free to opt out any time or opt in for other cookies to get a better experience. If you refuse cookies we will remove all set cookies in our domain.

We provide you with a list of stored cookies on your computer in our domain so you can check what we stored. Due to security reasons we are not able to show or modify cookies from other domains. You can check these in your browser security settings.

These cookies collect information that is used either in aggregate form to help us understand how our website is being used or how effective our marketing campaigns are, or to help us customize our website and application for you in order to enhance your experience.

If you do not want that we track your visit to our site you can disable tracking in your browser here:

We also use different external services like Google Webfonts, Google Maps, and external Video providers. Since these providers may collect personal data like your IP address we allow you to block them here. Please be aware that this might heavily reduce the functionality and appearance of our site. Changes will take effect once you reload the page.